How do you know if attending a conference was worth your while?

Going to a conference can be fun... but how do you know if it's a "good" experience?

A week ago, I shared a framework for goal-setting (MPV goals, or Minimum/Primary/Visionary goals).

If want your employer to foot the bill for your attendance at a conference, it can be quite helpful to identify (in advance) what you hope to get out of that conference. I spent last week at the eLearning Guild’s FocusOn Learning conference and I have to say, it was one of the best conferences I’ve ever attended, but…

The key question my supervisor (or myself or anyone else who plans to hold me accountable for the investment of time and money that was spent on my attending this conference) should be asking is: “So, you say it was a great conference… how do you know?”

At first, I tried to crowdsource some ideas on who I should be following by posting something to the official conference app’s activity feed. 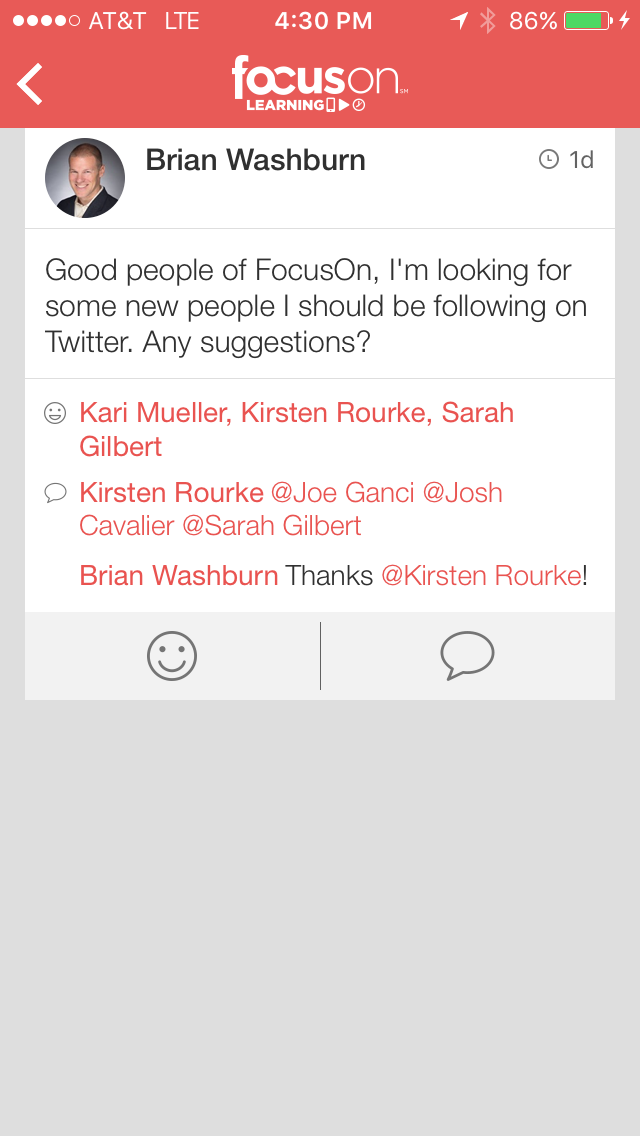 I was surprised by how few responses I got through this method, but it did give me several new people to follow (I was already following one of the suggested people). I also began to follow several of the speakers I liked, including Vince Han (on Thursday, I actually wrote about how much I appreciated how he projected something other than PowerPoint on the projection screen in order to engage the audience) and Soraya Darabi. All together, I ended up following 11 new people as a result of attending this conference.

2. Meet at least 3 people who I’d previously only met online.

During the final general session, a panel on where elearning is headed, Mark Lassoff made a point that really resonated with me. He suggested that it is imperative for people to attend industry events and conferences – whether local meet-ups or large, national conventions, because it is important to grow relationships with others in the field.

He used the word “relationships“, he didn’t merely say: “It’s important to network.” I couldn’t agree more. The four people I spent the most time with outside of the workshops illustrate Mark’s point about the importance of going beyond networking and into developing relationships.

1. Identify at least 3 performance support strategies and/or technologies to integrate into my work.

2. Have a draft completed for my Online Learning Conference presentation in September.

As I’ve already explained above, I met my co-presenter, Mike Taylor, in-person for the first time. While we spent several hours kicking ideas around, and we did put together a sort of bare-bones outline, we didn’t complete a full draft lesson plan before we each needed to run to the airport. We still have time, but the goal I set was to “have a draft completed” and so I need to grade myself unsuccessful on this one.

Yes, I’m leaving this conference with a lot of new ideas and I’m definitely looking forward to getting back to the office to try some things out. The key to success here, however, is to identify a new project that will result in time saved, money saved or some other sort of efficiency in my organization. I need to sit down with my notes to identify which projects could be quick wins, which projects can have a quantifiable impact on organizational effectiveness/efficiency, and which (if any) projects actually would serve to check both of these boxes.

In this week’s podcast, I talk a little about why we should constantly be looking to improve our L&D skillset, and I offer some specific suggestions for how we can do that, especially if we don’t have the time or budget to make it to a big industry event.

Know something? Say something!

Yes, we should know a lot about presentation skills and adult learning if we’re in the L&D field. We should also know something about the industry we’re developing training for.